How to become host no matter what Tips and Tricks

After you dialed in to a conference using telephone you will be prompted to enter access code followed by the #. If host is not present yet the system will prompt you to enter a PIN to become host. It doesn’t ask for the PIN if host is already in the conference. It works nice until host is not dropped abruptly from the conference. This may happen due to cell phone coverage issue for example. In this case the system may still think that the host is present while host calls back after the discon…

Thank you for your reply. The problem is we are not wanting to use the phone system, just the online meeting.

in online meeting you can have multiple hosts too

Option 1: login with the host login/password
Option 2: Enter host PIN during the meeting to upgrade your role to host.
Static Host PIN can be found on the web site (account info for the host)
Here is how to bring the DTMF panel in the Desktop client
You need to enter #PIN#

I’m using a PC. There is no menu like this on the top of my app 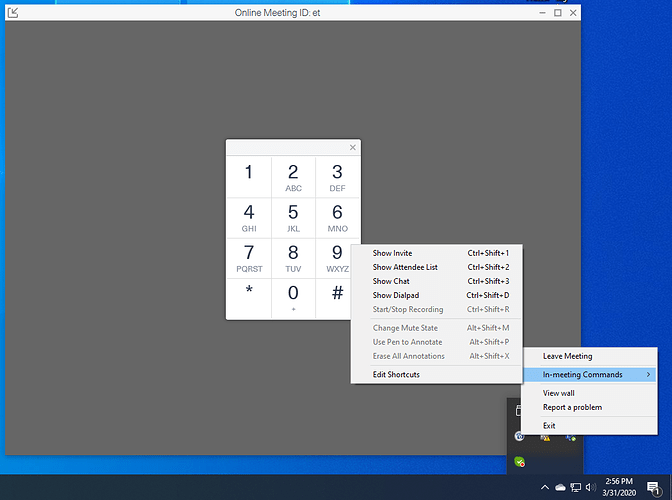 make sure you connected you computer audio to the meeting, otherwise the option will be disabled.

These instructions don’t make sense to me.
We use the same setup as the user above > Desktop Computer App ONLY, connecting with computer audio, and then video (no phone, numbers, codes, or PINs involved whatsoever).

With that scenario in mind, and with me being the host, and logged in as host, how do I declare a co-Host? Not a presenter, but an actual co-Host that has the same “power” I do.

And would that co-Host have to sign in via his/her own login account as a joining participant first before I then declare him/her a co-Host via maybe some right-click function on his/her name in the attendees list?

I cannot find any instructions for that scenario.

Your help is greatly appreciated - thank you

I agree. The instructions above are pretty cumbersome. Although they provide the workaround
It is probably doesn’t matter because on the next week we releasing the solution for this problem

In the new version of the app you’ll be able to right click on a participant and select “Assign as Co-Host” in the context menu. Nice and simple.

Fantastic!! Thank you so much for working hard to make this great service even greater! Our Club’s members are mostly seniors/elderly and not tech-savvy. I’m trying my best to do practice sessions with them ahead of our first big meeting on Sep 14. Therefore, I wanted to make sure that I know, how to assign a Co-Host so she/he can get to know the hosting tools as well.
Thank you again!

Today, our Club held its first ever online video meeting in its 88-year history - and it was a success

Needless to say, we are very happy!

Being the “tech host”, I assigned two co-hosts. Thanks to FCC’s new feature, it was very easy to assign two members as co-hosts while each had logged in via their own, personal, existing FCC accounts.

While participating members began appearing on the screen (I’m using the desktop app and gallery view), one of the co-hosts decided to download the latest update in order to take advantage of the recently extended gallery view as well.
Just to be clear: My instructions did say to always ensure that the latest version is installed BEFORE entering a meeting - but she forgot.

So when she downloaded and installed the updated desktop app, her app needed to reboot. At that moment, the entire meeting and all participating members were dropped all at once, including myself (host) and the third co-host. We then had to log back in and I had to re-assign the co-host feature to my two friends.

That must be a bug, right? Because a co-host leaving the meeting should not result in taking down the entire meeting, or?

When host or co-host exits from the meeting he is presented with the following dialog
It is not uncommon to choose the wrong option and drop the entire meeting.

Good to know - thank you very much!